Now with words – apologies for the previous post. Operator error!

We have been heading south back down the east coast to return to the Chesapeake Bay. We plan to visit the Annapolis boat show, and have the boat hauled out to be cleaned when we will return home for 3 weeks. There are some inevitable maintenance jobs to be done on A Capella which will have done nearly 10000 nm in a year, and it is important that all is in shipshape (!) condition before we head further south to the Bahamas, possibly Cuba and the Panama Canal for the winter.

Hurricane Florence and her mates Helene and Isaac are causing us much concern. As of now Florence will hit the US coast in the Carolinas this week. The effects of these hurricanes spreads over a substantial area causing high winds, water surge and heavy rain. We are now at the top end of the Chesapeake so hopefully in a relatively safe place with many hurricane holes available. It has been a surprise to us that hurricanes are so prevalent along this coast, although September is the most likely time. As you would expect weather information is plentiful and we receive 4 hourly emails so are becoming much more knowledgeable and will be prepared. 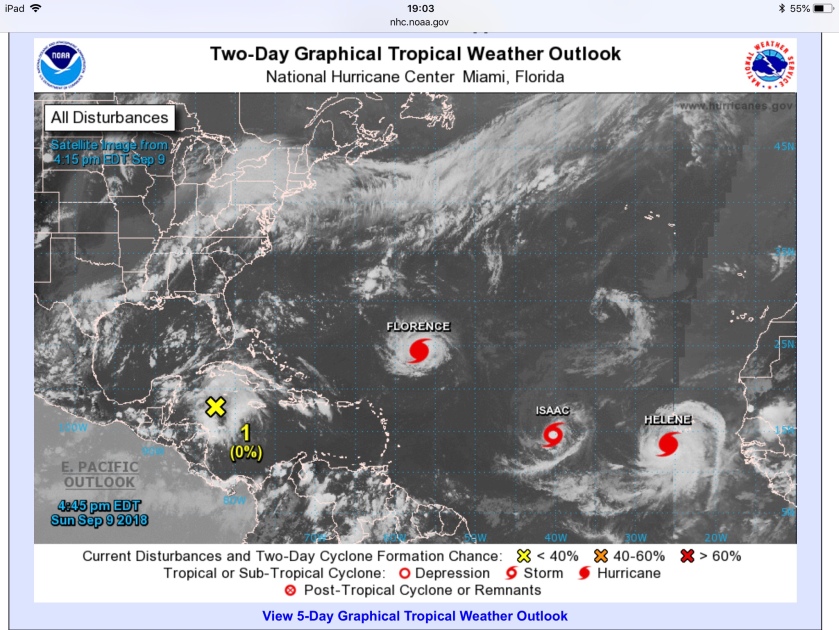 It is always a little dull retracing your steps and it has involved early starts ( to catch the tide) and long hops but it has not all been bad – plenty of asymmetric spinnaker and poled out jib, and actually quite social despite the many miles we must have travelled during the last 3 weeks.

We left Matinicus island for Portland. A lovely American couple Bob and Natalie Sellin very kindly lent us their buoy in Portland for a couple of nights and gave us excellent instructions on the buses. Portland is not a particularly big city but is the capital of Maine. We visited the Portland Museum of Art and had a great tour. It was especially interesting because many of the pictures were from Maine and of places we had visited. It was partly housed in a Federal style period house built in 1801 which was so similar in style to Leadon Court it was uncanny. I would not normally mention a supermarket but Hannafords in Portland actually cook your lobster on site for an extra dollar. This is a no brainer and a very civilised way of dealing with the cooking problem! I am now super efficient at de-shelling! We had the last lobster supper for some time. 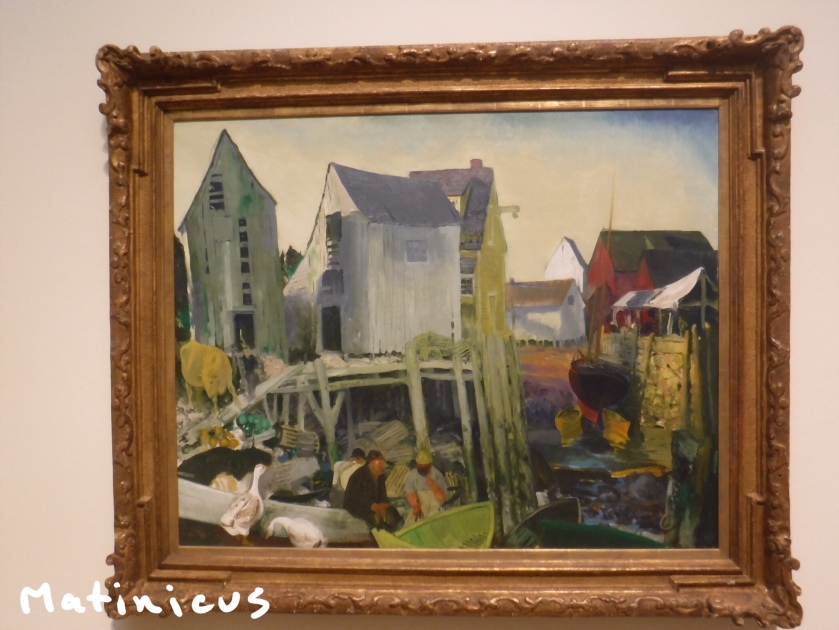 We were keen to visit Plymouth on our way south to learn about the Pilgrims. Julian had downloaded a film about their extremely tough lives when they first arrived in the New World. From Portland we went to Portsmouth and who should pitch up on the next mooring but Tod and Anne on Fiscal Stray! We had first met Fiscal Stray in Chesapeake and again when we arrived arrived in Maine. Our next stop was Rockport a pleasant seaside resort and finally Plymouth. We met an unmanned catamaran along the way which had travelled from Boston and belonged to the Massachusetts Institute of Technology. At this point we began to feel that we really had left the lobster pots behind – good. 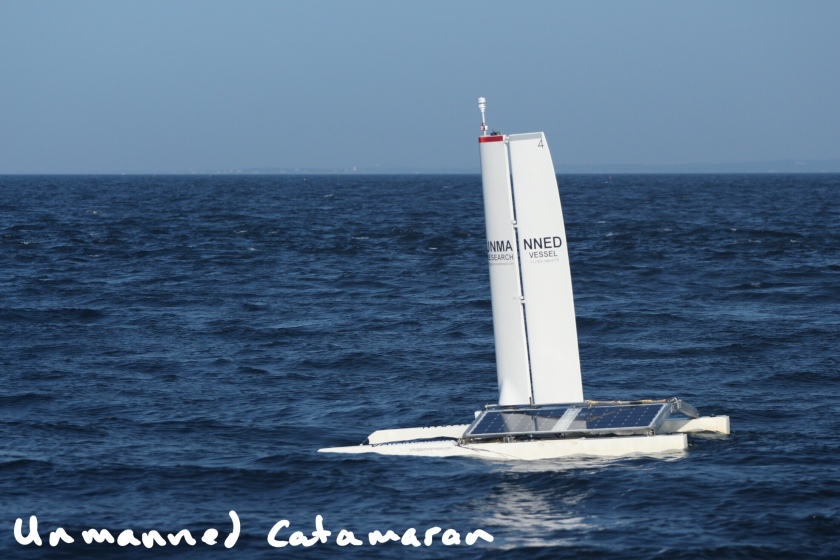 According to the pilot book Plymouth is not the first place the Pilgrims landed but the second, Province town being the first. In all honesty, I think we were more excited about the Pilgrim’s first home in 1620 than Plymouth townspeople. The replica Mayflower was not there, Leyden street where the Pilgrims first lived really looks like any other, and the Plymouth Rock – ummm! For the sake of clarity the original boulder has had some adventures. It was split and damaged when it was moved by teams of oxen in 1774, then generally neglected, then fell of its conveyance when being moved and was “remodelled” to fit into a new home in 1834, and finally it broke apart again when moved to its final spot in 1920. It has also been “hacked at” for souvenirs over the years. Anyhow we did have one of our better meals in the nearby restaurant so all was not bad. 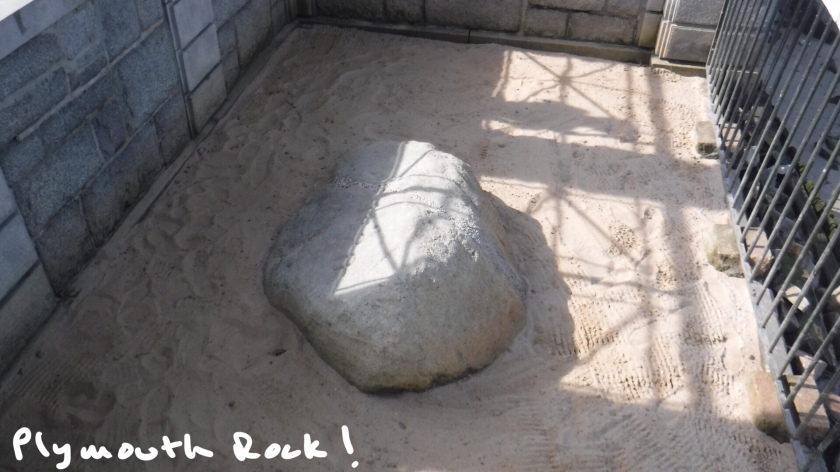 After stops at Marion, and Flint point, Rhode Island we arrived at Fisher’s Island where we met up with our friends Michael and Gill Gallin owners of Hull no 3. We had an excellent evening aboard Gerty. Thank you to Michael and Gill for being so hospitable and hopefully we will be able to return the favours perhaps in the UK, when they finally leave land! Moving on via Port Jefferson we arrived in Port Washington.

At Port Washington we caught up with Pete and Tracy Goss who we had met last year at their home outside Plymouth. Their boat, a Garcia, was launched just after ours and Julian and Pete had spent many hours debating specifications. We entertained on A Capella and it was great to catch up – we have all travelled many, many miles and definitely changed our way of life.

It was an early start the next day to catch the tide down the East River past New York and there were about 6 boats preceding down together (including Fiscal Stray!) which was rather fun. Sailing past New York was an amazing trip the first time and still pretty good the second time. We managed a photo stop with Pete and Tracy by The Statue of Liberty!

We then stopped at Raritan Yacht Club in order to met up with Noel and Tracy Dinan who have just placed an order for an Allures 45.9. They were keen to have a look at our boat and discuss various ideas. We had a great evening and thoroughly enjoyed the hospitality at the Raritan Yacht Club. Thank you Noel and Tracy and hopefully we will be able to meet again. We had planned to leave our boat here and travel inland for a week but given Hurricane Florence’s activity we felt it was a better idea to get ourselves to the top of the Chesapeake where we are less vulnerable.

We left Sandy Hook early and did a 36 hour trip down the New Jersey Coast, up the Delaware, through the C&D Canal and safely anchored up in the Sassafras River for a rest. All the tides were kind and the weather favourable most of the time. As you can imagine this is a well lit coast and the light pollution is terrible but it does make for easy night sailing. I did the first watch and had continuous lightning. It was alarming at first but as we gybed around Cape May at 2am it became thunder and lightning and very wet – not so good. It is a long time since we had done a night sail and it is always great when you arrive in good order.

We have just tied up on a dock just south of Baltimore. It belongs to a fellow OCC member and is supposed to be a good hurricane hole. The latest update re Hurricane Florence for our area is “some impact” and the forecast is for historic rainfall -well I suppose it could be biblical! So here goes for a very wet few days.