After leaving St Maartin we have travelled south along the Renaissance Islands. They are described as “the islands that brush the clouds” in our pilot book and they really do. Leisbeth from the Netherlands has joined for a scenic trip to Antiqua and thus it was particularly sad that we were unable to visit Saba and Statia, both former Dutch colonies and now municipalities of the Netherlands. These are tiny islands and off the beaten track but the weather and swell was definitely against us – we will try again.

We have visited St Kitts, a former British colony but now independent. There was much evidence of the colonial past. We also found a rather lovely drinking place, in a glorious setting along side the super yachts!

We are now at Monsterrat – a former colony and now British overseas territory. It is delightful, very friendly and by far the quietist anchorage we have visited so far. We had a great tour of the Island which concentrated on the Volcano. Soufriere is an active volcano and has erupted many times – the last time in 2010 but the biggest was in 1995 when the capital Plymouth was completely destroyed when covered in ash. There was also hurricane Hugo in 1989 which destroyed the island. The remains are a humbling reminder of nature’s power and the human impact is very evident throughout the Island – nearly two thirds of the population left following the eruptions. Half the island still remains an exclusion zone albeit there is now access, as the risk level is one. The sulphurous smell as we approached the island ensured we knew the volcano was still active.

The population is now about 5000 and it must be a dilemma as to how you provide infrastructure for such a small island population.

Interestly there are extensive St Patrick Day celebrations this week. The first European settlers on Monsterrat were Irish arriving in 1630 while escaping religious persecution. The Irish were also implicated in the 1768 slave uprising which took place on St Patrick’s Day. The celebrations are held every year to recognise the bravery of these rebels. The uprising was unsuccessful, and as was the practise in those days a brutal execution of the repels followed.

The island also has an impressive theatre/community centre which was built by Sir George Martin of Beatles fame. Leisbeth and I went to calypso singing competition. I am not sure about the quality but is was certainly loud and colourful.

We are now sailing to Antiqua to met Tim and Sally Birch from N. Ireland who are coming to join us. 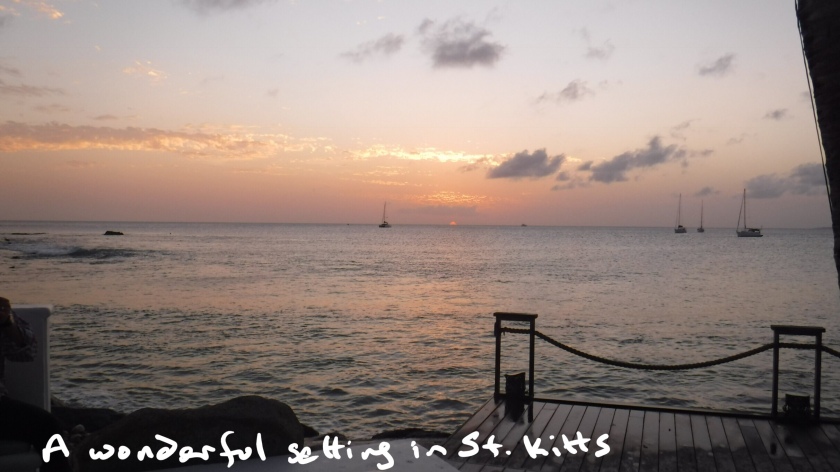 2 thoughts on “Islands that brush the clouds”